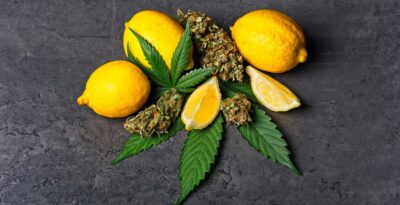 What are Plant Terpenes?

Terpenes and terpenoid compounds are found in all living organisms. They are especially abundant in green and flowering plants.  The plant uses its distinct chemical compounds to attract or repel users, and it’s estimated that there are 10’s of thousands of distinct terpenoids in the plant world.  While there are a few hundred terpenoid compounds in most plants, most terpenes are restricted to a given plant lineage or species.

There is evidence that some plant terpenes are beneficial for certain medical conditions and some are harmful.  The terpenes in cannabis give the plant its wonderful aroma and taste.

The terpene profile in cannabis determines the kind of high a chemovar (the measurable chemical markers in cannabis) will produce. These are  either uplifting or sedating along with its therapeutic properties. Terpenes have also been found to interact with cannabinoids & influence their effects.  More scientific research needs to be done on these complex molecules.

The terpenes in cannabis, and cannabinoids, are produced in hairs on the surface of cannabis flowers. Each compound has different effects.  There are about 50 prominent cannabis terpenes.  The 8 most common are myrcene, terpinolene, linalool, limonene, alpha-pinene, humulene, BCP (beta-caryophyllene), and ocimene. Knowing what terpenes are in high concentration, their aroma, and their potential therapeutic effect can be very helpful when choosing your cannabis.

The entourage effect is a hypothesis that is gaining more acceptance and is being studied more and more by scientists.  There are also studies on herbal synergy in general, not just cannabis.  Simply put, the entourage (*ensemble) effect suggests that the whole is better than isolated parts. Most prescription drugs are based on a single molecule model, while many plants, such as cannabis, contain hundreds of compounds such as major cannabinoids, minor cannabinoids & terpenes.  Many patients and scientists believe the link between whole-plant cannabis and the *ensemble effect (coined by Russo) will become more understood and proven in the coming years.

The pharmaceutical world has shown us that isolates, or single-molecule substances, can benefit humans.  There have been scientific studies done for decades on these compounds, and many of our pharmaceuticals were discovered by isolating chemicals from plants that helped specific ailments.  As mentioned, there has been very little study done on the whole plant and the entourage (ensemble) effect. However, the research that has been done corroborates the synergy between cannabinoids and terpenes.  Cannabinoids are affected by other cannabinoids, terpenes are affected by other terpenes, and each compound can be affected by the other compound.  It is complex, and we are delighted these compounds will be studied more in the future.

The 2018 Federal Farm Bill language caused an onslaught of isolates from hemp, Delta 8, Delta 9, Delta 10, THC-0, and HHC, into the market.  Caution is warranted. There is still a lack of research and understanding for these isolates and synthetic products. The lack of standardization in the extraction process is even more troubling.

Patients need access to full-spectrum whole-plant cannabis in Utah. We know through past studies that organs carry receptors (CB1, CB2 and others) that respond to these compounds. Demonstrating that cannabis and humans have had a compatible holistic relationship for many thousands of years.

Being balanced about the positives and negatives of the plant, its been historically documented the side effects like dry mouth and eyes, paranoia, anxiety, and the munchies.  As more wide spread use is occurring across the country, we are seeing some data points of concern like heart issue, CHS (Cannabinoid Hyperemesis Syndrome) and “popcorn lung” occurring from concentrates.

So it is cause of great concern when advocates see a lack of standardization practices in the industry.

The Utah medical cannabis program is filled with compounds derived from hemp like Delta 8, CBG, HHC, and others.  Some of these compounds will get you “high,” and others are like CBD and will not get you “high”.  The three things these compounds have in common are:  1) They are all found as trace elements in cannabis  2) The products use unproven and possibly harmful methods to concentrate these minors cannabinoids, then stripe them in acid to make the products  3)  Little to no research has been done on safety in regards to consumption or effectiveness for specific ailments.

The chemotype approach to cannabis is mostly seen in Utah and other states. This categorizes cannabis into different types:

The focus is heavy on the THC: CBD ratio, mainly influenced by legality.

Terpene profile, cannabinoid presence and potency, and other standard biomolecules help scientists identify chemovars. This is an approach to cannabis that’s still underdeveloped but may offer researchers and medical professionals a better guide for user success.

Something our program lacks is adequate labeling. While we have had a chemotype approach for legality’s sake, this “medical” program does not reflect a patient’s needs.

To guide us, patients need more than the strain aka cultivar (cultivated variety, Like Girl Scout Cookies) name.  Patients deserve product labeling that lets them know if the final product contains any hemp-derived cannabinoids, how it was processed, and the terpene profile at minimum.