After this much time and many bills thrown in the hopper, we tend not to get too excited about news of "impending" federal reform.

We'll comment on this bill's chances below, however, there is one feature of this bill that really bothers us which we haven't seen in all federal reform proposals:

Namely, as we see it, 5% federal tax on all legal cannabis on top of all the existing state levies – even granting that it's "earmarked" for positive purposes – would mostly help cement the underground markets for all time and eternity rather than rationalize the federal budgeting and spending process….

That is, such a levy on all legal cannabis on top of all the existing state cannabis taxes would absolutely mean that the cartels and all the rest of those who live outside of the tax paying world will become even more entrenched by increasing their already considerable advantages over legal growers, processors and sellers.

And in this mentality we'll never get regulated, inspected edibles and vapables everywhere. So problems like the VAPI epidemic will continue and will be highly resistant to being solved.

A moderate level of taxation at the state level is somewhat tolerable, but adding federal taxes and God knows what on top of that is just saying hello to the Pablo Escobars and El Chapos of the world… …PS: and by "moderate" we mean just that: figures like 25% are NOT moderate. And remember the legal producers are also collecting sales tax on personal use cannabis and paying state and federal income taxes.

The cartels don't have ANY of those expenses, nor are they bogged down in paperwork, licensure, inspections, Certificates of Analysis, etc. and they don't have to operate expensive stores (and certainly don't have to hire pharmacists to be on duty at all times as the 3001 law requires).

Cannabis isn't like fine wine and good bourbon. Or even slickly produced and packaged cigarettes. Most people won't accept poorly made substitutes, so there aren't any real mass underground markets for these product.

However, it's trivially easy for anyone with few resources to put out a stony cannabis product anywhere in the country at any time with little capital investment, so the "sin tax" model just isn't going to work. Colorado is definitely finding this out. As are other states.

Plain talk: Let the government settle for income taxes and sales taxes from legal businesses operating above ground and within the law – and let's just get on with rational reform already. The government could literally have saved TRILLIONS of dollars needlessly spent on the fruitless and counterproductive drug wars over the decades and could be saving hundreds of millions or more per year today which could be used for all kinds of positive purposes.

But will the bill pass?

Remember the banking bill? That actually got passed by the House over a month ago. And now it's sitting in a (very) long queue with over 200 other House-passed bills the Senate hasn't even scheduled debate on in our severely gridlocked Congress.

So even if this bill were to pass the House as well, we don't see much chance of its being taken up in the Senate this session.

For one thing, the bill lacks a single senate Republican co-sponsor. And for another, that more conservative body will be thoroughly wrapped up in impeachment proceedings, budget bills and election jockeying for months from the looks of things. 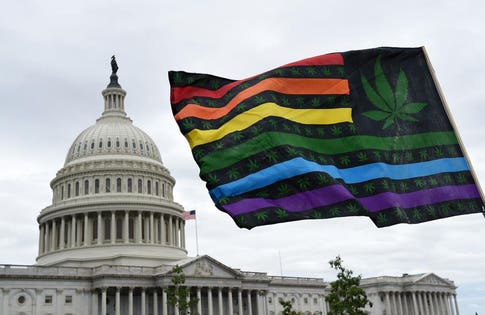 The vote on the far-reaching cannabis legislation follows House passage of a marijuana banking bill.
[ad_2]