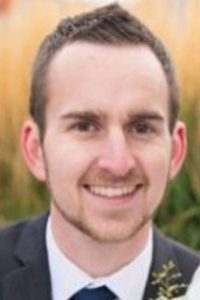 As a member of the LDS Church, I seek to live my life by its standards. But over the last several years, I’ve been faced with a challenge.

In May 2012, I was walking underneath a stage during a campus activity. It was dark, and I couldn’t see the 12-foot pit in front of me. I fell, breaking my neck and back after hitting my head on a steel beam and the concrete bottom. Since my injury, I’ve had spinal and vertebrae complications, arthritis, fibromyalgia and constant moderate to severe pain.

I tried a variety of medications, but nothing brought substantial relief, and many of the prescription opioids left me immobile and unable to function. After a year and a half of going to pain clinics and specialists, I tried medical cannabis. It relieved my pain more effectively than anything I had tried, and I was able to completely transition off of opioids.

Last year, my wife and I decided to get married. We wanted to be married in an LDS temple, and to do so, we had to follow several standards, including abstaining from all illegal substances. This meant I had to stop using medical cannabis and go back to the prescription opioids that clouded my life. I did so, and we were able to be married in accordance with our LDS faith.

That was a sacrifice I was willing to make, but the experience has led me to become involved in the movement for reform. Before getting married, I was told that if I had lived in another state where medical cannabis was legal, then I would have been able to be married in the temple. I know there are other LDS members who seek relief from medical cannabis but want to do not want to deviate from our community’s principles and teachings; this is why I’m fighting for policy reform.

In Utah, it’s been an uphill battle. Some progress was initially made, and our state allows cannabidiol (CBD), a type of medical cannabis that does not contain tetrahydracannabinol (THC), to be used by patients who suffer from extreme epilepsy. This is good news for those patients; the problem is, the state failed to legalize the production or sale of medical cannabis in Utah. This forces patients to travel across borders to states where it is legal, a process that is not only expensive and onerous but also extremely legally risky.

Another issue with Utah’s CBD law is that by restricting access to only patients with severe epilepsy, our Legislature excludes countless other patients — including myself — who suffer from other afflictions. Furthermore, by restricting medical cannabis to include only CBD but not THC, Utah lawmakers are limiting the potential healing powers of this plant. Research shows that medical cannabis containing CBD and THC more powerfully treats symptoms of chronic pain, Parkinson’s, arthritis and a host of other issues than just CBD can alone.

Last but not least, despite the fact that Utah and 14 other states have CBD laws, and 28 more states plus the District of Columbia have full medical cannabis programs, all types of cannabis — medical, CBD, or otherwise — remain illegal at the federal level. This means that anyone in Utah who uses medical cannabis legally under Utah law is still at risk of federal prosecution.

On the federal level, there is also an opportunity for reform. The Compassionate Access, Research Expansion, and Respect States (CARERS) Act, currently in the U.S. Senate, would protect any individual using medical cannabis in compliance with his or her state’s laws from federal prosecution. Sens. Mike Lee and Orrin Hatch should take this opportunity to join in the bipartisan coalition of support for this bill by signing on as cosponsors. The CARERS Act heads to the Senate Judiciary Committee. With Hatch and Lee both holding a spot on this committee, their support would be crucial in moving forward with this important piece of legislation that would help patients in Utah and across the country.

We need laws that reflect the needs of people, safe needs that are supported by science. Every Utahn, including LDS members, deserves access to medical treatment and to be protected by the law.

Brian’s story was published as an Op-Ed article in Salt Lake Tribune: http://www.sltrib.com/opinion/3875808-155/op-ed-utah-patients-need-safe-legal