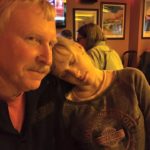 My name is Doug Rice. I am a recently retired firefighter paramedic, with over 30 years of experience in pre-hospital emergency medicine. During my career, I served as a structural firefighter, industrial firefighter, paramedic, hazardous materials technician, EMS Instructor, Fire Officer, and was “red card” certified as a wildland firefighter. I was also certified as a Level 2 fire service instructor, a Level 1 fire investigator, and carried numerous certification levels for major incident management (NIMS/IS 100, 200, 300, 400, 700, 800). After 5 years as a part time firefighter and 28 years full time, I retired in July 2016 at the rank of captain, which I held for 19 years. I was also a member of FEMA Utah Task Force 1, and responded to Ground Zero at the World Trade Center with the task force in September 2001. I was diagnosed with cancer in 2015 that has been linked to my time at Ground Zero.

I have been married to my wife, Julie, for over 30 years. I am a resident of Salt Lake County, and have resided in Cottonwood Heights, Murray, Midvale, South Jordan and currently West Jordan. Julie and I have one child, who was born disabled. And that is why I am here.

Our daughter, 24-year-old Ashley, suffers from Angelman’s Syndrome. As part of her disability, Ashley has Epilepsy, which has responded very poorly to pharmaceuticals. Using prescription medications to “control” her seizures, Ashley was still having between 8 and 24 seizures each day, usually 2 to 5 minutes in length (plus a recovery period after each seizure). With the help of CBD, the severity and length of her seizures has been reduced, and she currently experiences 3 to 6 seizures of less than one minute, each day. Julie and I have purchased a Utah State Hemp Registry card to allow Ashley to use CBD legally.

In 2015, we began investigating the use of “whole plant” cannabis, or at least something more than the narrow use of CBD that had been recently legalized in Utah. So while on a trip to Colorado that year, we decided to try adding THC to Ashley’s daily CBD, with great results: Ashley had her first seizure-free day in years. That was eye-opening to us, since we had never considered cannabis (whole plant) as a viable treatment for epilepsy.

That trip was both good and bad: while we had great control of her Epilepsy, the seizures increased upon return to Utah, where we could not possess THC without the threat of losing my government job and paramedic certification. Loss of my job would leave our family without health insurance.

A lot of friends suggested we move to Colorado or just break the law and use higher THC oil here. But…being in my late 50’s, I understood there was little chance of getting hired in Colorado as a firefighter… it’s a very competitive job even among young people in their 20’s. The opportunity to move to Colorado to treat Ashley with THC just wasn’t presenting itself.

More investigation led me to discover cannabis was helping more than just Epileptics—a lot of neurological disorders, such as MS, MD, and many cancers were responding well to cannabis as part of the treatment. Many patients were replacing opioid pain relievers with cannabis, either as ingested oil, or by smoking it. Gastric disorders were also responding to cannabis. So many people were seeing improved health and quality of life simply by adding cannabis, I was astonished.

We decided we needed to help change things in Utah, for people who couldn’t pull up their entire life and trudge east to a cannabis friendly state. As you can probably imagine, I am a passionate advocate of medicinal cannabis, and I have lobbied for expanding Charlee’s Law to include other patients besides epileptics, and to allow for greater access to more cannabis than simply CBD. I worked a little with Epilepsy Association of Utah as they fought for the use of CBD in epileptics. I’ve grown more passionate about helping people with Epilepsy and have become more involved in EAU. So in addition to working with TRUCE, I currently serve as vice president of Epilepsy Association of Utah.

I should also explain that I was with my mom when she died of cancer in 2009. My wife lost her mom to lung cancer in 2013. That trip to Colorado in 2015 was to attend the memorial for a brother firefighter who died of advanced prostate cancer in March 2015. I bring this up to compare these cancer deaths: my mom was comatose when she passed; she spent the last weeks of her life in a morphine-induced coma in a hospital as the cancer killed her. She never spoke to me that last week, but raised her eyebrows (without opening her eyes) to acknowledge my voice when I spoke to her. My fellow firefighter, on the other hand, was in Colorado. He was using cannabis for pain relief because the use of morphine was killing him. His body was shutting down from the use of morphine, and the pain from his cancer was not being controlled. With his doctor’s assistance, he turned to cannabis. My friend was stage 4 in 2009. He died in March 2015. Two days before his death, we Skyped with him and his wife; he looked tired, but we had a deep, emotional conversation. He was able to smile. And his words made sense. I mention this because of the stark comparison: my mom in a morphine coma and my buddy having a lucid conversation with me, hours before dying. And THAT is the difference between pharmaceuticals and cannabis—the quality of life cannot remotely be compared.