In loving memory of Kelli Hessheimer 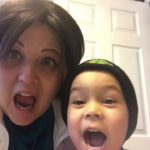 My “story” begins the summer of 2012. I had just had my baby boy in April, and was breast feeding when I found a lump that I had thought might be a clogged milk duct. I went to my doctor who agreed with my suspicion and gave me advice as to what to do. However, the lump didn’t go away. In fact, it seemed to be growing and getting harder. I went back to the doctor about a month later and she expressed some concern and set up an appointment at the breast care center for a mammogram.

I went in on September 16, 2012, for the exam. Immediately after, I began experiencing pain and I was sent in for an ultrasound and a biopsy. My sister was with me and asked the guy that was doing the biopsy if he was sure that it wasn’t just a clogged milk duck. He responded with a somber look and said, “It’s not.” Two days later I got a call from the hospital and was told that it was, indeed, breast cancer, and they set me up with an appointment to see a surgeon. After examining the lump, the surgeon explained to me that it was too big to remove surgically. He sent me over to the cancer center where I spoke to an oncologist who set me up for all the scans that I needed: PET scan, CAT scan, and an MRI. The results of these scans were terrifying: the cancer had metastasized and was pretty much all over my body. My oncologist told me I had invasive metastatic (stage 4) HER2 positive breast cancer. The prognosis was up to 6 months.

In the past 4 years I have had ups and downs and a whole lot of treatments. I have been on four different kinds of chemo and radiation to my breasts, spinal cord, and hips. I’ve also had a multitude of prescription drugs to fix or help the side effects from chemo and radiation. I was taking morphine every day, lorazepam for my anxiety, Effexor for depression, oxycodone for pain, gabapentin for muscle pain, and promethazine for nausea. Each of them came with their own unpleasant side effects. Last Christmas, a friend who lives in Oregon came down and talked me into trying some medical marijuana. It worked. I no longer had to use the oxycodone or a couple of the other pills that I’d been taking. I decided to go up to Oregon for a whole month and try the Rick Simpson Oil (RSO) treatment. It helps tremendously with all the side effects that come with battling cancer. I have an eight-year-old daughter and a four-year-old son who depend on me and I need to fight, and fight, and fight until I’m better because they should not have to live without their mother. But they also need me now, and cannabis has ensured that the battle itself doesn’t take over my life, so that I’m able to be the mother to my children in the way that they need right now.